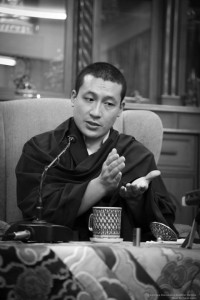 Here are questions and answers about practice.

What does it mean to be omniscient?

His Holiness explained that, in essence, omniscience means that everything that there is to know and discover is through direct experience. Generally, any knowledge that we gain about something is gained indirectly, on a basis of dependence or referral to something else. But as our Samadhi or meditative skills grow, we develop a greater capacity to relate to phenomena directly.

What is the meaning of Rime, and how do we relate to teachings from other lineages?

In answering this question, His Holiness highlighted the importance of having respect for other traditions and practices, which he explained essentially means not discriminating. He elaborated by saying that how we get caught up in discriminating is by relating to spirituality through emotion, which evolves even further as we develop personal connections with particular schools of spirituality, traditions, and methods. In relating to spirituality through emotion, we create a lot of confusion for ourselves, making it difficult to see things clearly. This brings down the foundation of spirituality. So in order to safeguard ourselves we need to reflect on this idea of respect, and we need to relate to spirituality with less emotion and with great openness. Wisdom is important here, because we need to recognize that there are many different methods that lead to the same result. But because of our emotions, our habits, and how we view life, we connect with only a few methods. But that shouldn’t mean that we can’t have respect for all the other methods. Having this kind of attitude, he said, is getting closer to an understanding of what the term Rime means.

Are yidams real beings or are they personifications of particular qualities or activities, and how should we relate to them?

His Holiness responded to this question with an example related to attaining a particular state through lifestyle. If one follows a healthy lifestyle, they can reach a state of good physical health. One could then say that this state of good health is a result of an individual. Likewise, the yidam is also a result of an individual that is achieved by putting motivation, effort, and enthusiasm into a yidam practice. Because the yidam is bought into fruition by a being, by consciousness; it is not lifeless. Therefore, we can relate to the yidam as something with life.

How does making wishes to yidams for oneself actually work?

His Holiness said that how wishes function is very complex and something that can only really be gazed upon if one’s meditative skills are highly attuned. In basic terms, connecting with wishes or aspirations is in some way related to understanding one another. In order to understand someone, we need to have similar conditions that enable us to see the world in a similar way. We must be functioning at a similar frequency, so to speak.

How does making wishes to a yidam for other people work? I can’t alter someone else’s karma, right?

His Holiness said that if we have similar conditions to another human being, then it might be possible to alter their karma by influencing them. For example, we can influence another person by encouraging their negativities or encouraging them in a good way. Making aspirations for other people works in a similar way in that we can influence someone by depositing something. So long as there is a similar frequency then there is no need to deposit anything because it is already present, and just needs initiating. However, if the frequencies between two people aren’t at the same level, then all we can do is deposit something and then let it ferment.

How to manage feelings of indifference?

His Holiness responded by saying that although it is a part of the human condition and the process of maturation, it is important to not allow such feelings to become too solidified, as then it can take a lot of time and energy to dismantle them. He advised that bringing awareness to them is a good thing, because when we witness what is going on, then we are in control. His Holiness clarified that when he mentioned the human condition, he was referring to the fact that soon after we are born we learn about what is pleasant and unpleasant, and we then constantly swing between these two extremes. He said that in some unconscious way, we perhaps feel the need for these extremes in order to build up a kind of identity. But this is an erroneous identity that does not allow us to be free; our actual identity is free from extremes. His Holiness said that this sense of indifference can be used to balance out these extremes.

What is the value of humility?

His Holiness replied that humility is invaluable because it enables humans to refrain from making mistakes. This ability is unique to humans because animals and gods do not have the conditions to practice humility.

His Holiness responded that there is no way of measuring the amount of merit accumulated, and besides, what really matters is the purity. He added that the reason that merit is greater when it is collectively accumulated is that we, as human beings, are dependent on each other in order to achieve anything. Therefore, if the effort is collective, then that collectiveness or dependency sis embodied in the effort.

His Holiness replied that there are many ways to do this. For now, a simple practice of mindfulness; of bodhicitta; of understanding and practicing Shinay and Lhagthong (e.g. Shamatha and Vipassana) is better than getting caught up in more intricate practices, otherwise we might get lost in more complex practices and not achieve anything. A simple absorption of meditation is really what is required to loosen attachment to the red and white essence.

What should be our main focus during prostrations and Vajrasattva practice?

First, His Holiness said that because we are engaging in these practices according to the Bodhisattva Way, it is essential that we have Bodhicitta. When doing prostrations, the main thing to focus on is devotion because we are taking refuge in the refuge tree. The focus of Vajrasattva practice is on purification; therefore when engaging in this practice we also need to understand karma and kleshas, as these two things are what we are aiming to purify.

How to practice when one is tired and unfocused?

His Holiness advised that if we are tired we should not overdo practice. He also encouraged us to develop a healthy schedule for our spiritual practice wherein we are engaging in regular practice but not going over the top. It is important that our practice schedule fits the individual circumstances of our lives so that we can develop a sustained practice that becomes an integrated part of our lives. In the same way that healthy habits from childhood have stayed with us because they were most likely developed in a balanced way, we should approach practice with a balanced motivation and in a way that avoids extremes. His Holiness added that, of course, the more that we can practice the better.

How can we practice in preparation for death?

His Holiness said that, basically, practicing death simply means being more aware of impermanence and the ever-changing state of life. When we develop an awareness of impermanence then we tend to encounter fewer obstacles, or at least, when we do encounter obstacles we don’t tend to crash into them. Although there are many methods for preparing for death, one method that His Holiness recommended for getting in touch with life and death is to visit hospitals and see people in various stages of life; where some people are giving birth, some are ill, and others are passing away.

His Holiness acknowledged that praying in times of distress is a part of being human but that if you have a good rhythm of spiritual practice then naturally it takes care of everything because prayer is already integrated in the practices. He noted that it is when we are less connected with spirituality that we tend to pray, and during such times we generally don’t know what to pray for, or how to pray. He likened this to a kind of begging.

Can you tell us about the relationship between wisdom and method?

According to the Bodhisattva Way, wisdom and method go hand in hand. If you had one without the other, it is like one leg is walking faster than the other and you would just end up going around in circles.

How important is trust?

His Holiness said that trust is very important because otherwise we are not fully engaged. Consequently, if there is a result achieved then we will not see or experience it. Nonetheless, trust needs to be generated carefully and with wisdom, which initially simply means common sense and logic and later evolves into something else as we become closer to understanding wisdom. Otherwise trust without wisdom might lead to blind devotion or blind trust, which could potentially lead to harm or unnecessary outcomes. If nurtured properly then trust can mature into something very useful.

How we can overcome expectations?

His Holiness said that we cannot really say whether expectations are good or bad, as they are just another type of mental phenomena that we generate. So, first, one needs to analyze deeply the times that expectations have arisen in one’s life and examine closely how it functioned, how it took hold, and what the effect was. Once we have a direct experience, where we can touch it, only then can we decipher whether it is good or bad and whether or not we should opt for it.

What is the function of gods?

His Holiness remarked that although gods play a huge role in preserving the environment and the balance of the universe, and also exert a strong influence on the human condition, because they are also dependent on karma, they are equal to the rest of sentient beings.