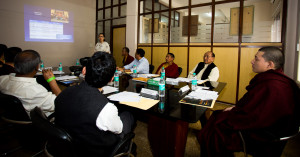 On Friday and Saturday, 18-19 March 2016, the annual KIBS Governing Body Meeting was held. The meeting was chaired by KIBS’ Chief Patron, His Holiness the 17th Gyalwa Karmapa, and the President of the Society, Professor Sempa Dorje. Important issues were placed on the agenda and discussed at length, including future administration of K.I.B.I.’s academic program, which is and will continue to be the heart of K.I.B.I.’s activity according to the wishes and aspirations of the late 16th Gyalwa Karmapa and the late 14th Shamarpa. Additionally, it was decided at the meeting that the public courses and programs will be expanded in the future, given their popularity and benefit to many guest students from around the world. Also at the meeting, the annual K.I.B.I. report for 2015/16 with its outlook on the upcoming academic year, the KIBS account summary for 2015/16, and the KIBS Europe financial report were presented; changes in the KIBS working committee were discussed; and the farewell function for K.I.B.I.’s first batch of students who graduate this year was decided.