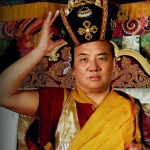 The 16th Karmapa, Rangjung Rigpe Dorje (1924-1981), was born at Denkhok, located in the Derge province in east Tibet. Jampal Tsultrim, the 15th Karmapa’s personal attendant, had been entrusted by his master with a letter setting forth the circumstances of his new incarnation.
The 16th Karmapa was a fully enlightened being, the King of Yogis, who showed complete intuitive wisdom and compassion, radiating joy. While other teachers would use dreams, divinations, or other methods to identify the reincarnations of important teachers, the 16th Karmapa would simply know. He would then tell the astonished students of the late teacher where they could now be found. His compassionate activity for others was beyond words or concepts. Read the full life story of the 16th Karmapa >> 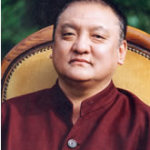 The Karmapa International Buddhist Institute originates from the wish of His Holiness the 16th Gyalwa Karmapa, who was the spiritual leader of the Kagyud School until he passed away in 1981. He specified several projects to be completed in order to establish the Karma Kagyud lineage outside of the Himalayan region. Among these projects is an institute of higher learning on Buddha’s timeless wisdom, teaching Buddhist philosophy, the theory of perception and Tibetan language. It should be accessible to Buddhists from around the world who are not familiar with Tibetan Buddhism.

His efforts to help develop the study and practice of Buddhism in India began with the formation of the Karmapa Charitable Trust in Gangtok in 1961 with the help of the then political officer Mr. Appapant. In 1963, he developed the Dharma Chakra Centre monastery in Rumtek, Sikkim, where Buddhist monks and nuns could undergo a thorough Buddhist education. In 1973, he submitted an application to the Government of India requesting some land in order to develop a Buddhist education centre for a worldwide audience. Under the guidance of the then Prime Minister Mrs. Indira Gandhi, the government of India granted 1.45 acres of land in the Qutab Institutional Area to the 16th Gyalwa Karmapa in 1979. On the 8th of November 1979, the 16th Gyalwa Karmapa and His Excellency Shri Neelam Sanjeeva Reddy, then President of India, performed the Foundation Laying Ceremony together. The then Vice President of India as well as the then Delhi Lt. Governor were also in attendance.

In 1981, the 16th Gyalwa Karmapa passed away, but the Karmapa Charitable Trust carried on with the project. Due to a lack of sufficient funding, the construction could only be completed in the year 1990. At that time it was named the Karmapa International Buddhist Institute. On the 5th of February, 1990, Kunzig Shamar Rinpoche who was the active trustee of the Karmapa Charitable Trust invited His Excellency Shri Ramaswamy Venketaraman, the 8th President of India, to inaugurate the Institute.

In the same year, the Karmapa Charitable Trust appointed Kunzig Shamar Rinpoche as the chairman of the Institute and under his supervision, a board of educators organised the curriculum of Tibetan Buddhist subjects, language and so on. Since then, the Institute has been actively operating to provide Buddhist education to students coming from various parts of the world.

In 2006, Kunzig Shamar Rinpoche appointed Prof. Sempa Dorje as the educational director of the Institute. He is one of the most senior researchers in the field of Tibetan Buddhism, and a former Professor (now retired) of the Central University for Higher Tibetan Studies, Sarnath.

In 2007, the faculty was enlarged, and the number of students also increased.

On 19th January, 2012, the Indian Government issued the certificate of registration for KIBS. Afterwards, the President of the Society, along with his team, offered the certificate in a short ceremony to HH the 17thGyalwa Karmapa.

In 2014 the new Bachelor of Arts in Buddhist Studies program started in KIBI, in collaboration with Mewar University (MU), Rajasthan.

In 2018, KIBI has been listed as a registered learning institution by the Ministry of Home Affairs, Govt. of India. This recognition authorizes KIBI to independently design and conduct courses, which is a significant milestone in the institute’s evolution.

In this regard, commencing from the academic year 2019-2020, KIBI will resume its academic courses and offer a 3-year program leading to a Diploma in Buddhist Studies. This course will stretch over 3 academic years and is divided into six semesters.