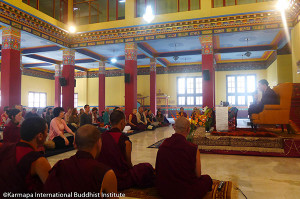 His Holiness the XVIIth Gyalwa Karmapa Trinley Thaye Dorje blessed and inaugurated the Shamatha Course with an auspicious inaugural teaching on the course subject of meditation on 08th November 2012.
His Holiness welcomed about a hundred students and expressed his profound appreciation for their commitment to the meditation program as conducted by Karmapa International Buddhist Institute (KIBI) under the auspices of Karmapa International Buddhist Society (KIBS).

As a matter of auspiciousness, His Holiness expressed great joy that such a course was being conducted in the noble land of India – the birthplace of Buddhism. His Holiness emphasized that while study, contemplation and meditation was integral to all Buddhism schools, the Kagyu lineage of Tibetan Buddhism was also renowned historically as ‘Drubgju’ or the lineage of meditators for its preeminent emphasis on meditation.

His Holiness encouraged the students to study, contemplate and meditate with determination and focus as a vehicle to improve one’s mind, human nature, and spiritual state. His Holiness also stressed that such transformation would result in them becoming role models which was a cause of great benefit to all sentient beings.

While His Holiness extolled the growing global trend in meditation as a wonderful and encouraging aspect of the modern era, His Holiness stressed that meditation in the Buddhist context, transcended the contemporary tendency to practice just to achieve temporary peace, escape difficult life situations, or to relax and feel ‘positive vibrations’. His Holiness then emphasized that meditation was a profound means to know oneself deeply and understand the fundamental roots of life and reality.

His Holiness counseled the students never to be satisfied with progress on the path but to continually push oneself further along the path at an appropriate pace. His Holiness also spoke at length about the pitfalls of the path of meditation such as emotional judgment of results and pointed out that authentic results would come about only by going ‘deeper’ and further into the practice.

His Holiness touched on the subjects of esoteric meditation in the Vajrayana traditions such as the Thousand Armed Cherenzig meditation as profound and skillful means to liberation and explained that all techniques and instructions taught in the course were likewise skillful means on the path of meditation. His Holiness advised that meditation was an experience of individual transformation which, while being vague in beginning and along the path, would progressively clarify itself as one progressed further on the path.

His Holiness then led the assembled gathering in a meditation session which concluded with collective aspirations and dedications.
In the afternoon, Khenpo Mriti, Administrator of KIBS, gave a broad outline of the Samatha course. Khenpo outlaid the conception of the meditation course in line with the vision of KIBI as an educational institution under the auspices of KIBS. Thereafter, Khenpo gave a broad outline of the objectives of the course and instructed the students about the daily schedule, structure of course, and administrative arrangements.

Khenpo then imparted a historical discourse on the development of meditational philosophy in early Tibet when the transplanting of Dharma from India to Tibet was being established. An area of focus of the talk was the selection of meditation scripture and commentary by the academic committee along strict non-sectarian lines. Khenpo also informed the students that the selection of the curriculum was personally overseen by Kunzig Shamarpa.

Khenpo instructed the students to fully avail the unique conditions of the course provided by KIBI: spiritual guidance and oversight of His Holiness the XVIIth Gyalwa Karmapa; a condensed yet comprehensive month-long course; and a broad-based teaching faculty led by Professor Sempa Dorje, an eminent and rare contemporary scholar well versed in both Indian and Tibetan commentaries.