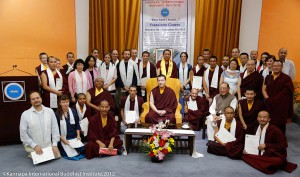 His Holiness the XVIIth Gyalwa Karmapa Trinley Thaye Dorji, supreme head of the Karma Kagyu lineage graced the closing ceremony of the inaugural Translator’s Course 2012 on 04th November, 2012.
Jigme Rinpoche, General Secretary of His Holiness the Gyalwa Karmapa, opened the address with an extensive outline of the importance of translations richly interspersed with an array of spiritual instructions. In particular Rinpoche emphasized the importance of in-depth commitment to the painstaking process of becoming a translator, to go ‘deeper’ and to bring the aspirations to benefit many generations through authentic translations to a fruitful end. Rinpoche encouraged the students with a host of spiritual advice such as His Holiness the VIIIth Gyalwa Karmapa Mikyo Dorje’s instruction to connect one’s every practice, from chanting mantras to translations, to the philosophical view of Madhyamaka for accurate and longstanding results.

Khenpo Mriti, Administrator of Karmapa International Buddhist Society (KIBS), recounted that the resounding success of the Translator’s Course made all the operational challenges and tribulations of the inaugural course of worthwhile spiritual significance. He reminded the students of the auspicious conditions that shaped the success of the course: from the spiritual guidance of Their Holiness the Gyalwa Karmapa and Kunzig Shamarpa to the extensive guidance of leading faulty members from all over the world under the profound direction of Professor Sempa Dorje. In conclusion, Khenpo Mriti remarked that the administration was energized by the successful conduct of this course and would strive to offer more enabling conditions to all future translators from all over the world.

The next address was a comprehensive Accounts Report of the course by Venerable Lekshay Gyatso, treasurer of KIBS, who gave a detailed financial account in the interest of transparency and accountability.
This was followed by the award of certificates by His Holiness the Gyalwa Karmapa to all the graduating students which included a special Best Student Award and an Award of Appreciation for guest teachers of the course. This was followed by thanksgiving ceremony for all the painters who had volunteered for the painting renovations of KIBI.
Professor Sempa Dorje, Director of KIBI, made the Vote of Thanks address to the entire teaching faculty, guest lecturers, volunteer and regular staff, administration, and students whose heartfelt participation and commitment had made the inaugural Translator’s Course a resounding success.

His Holiness the Gyalwa Karmapa began his address by congratulating the students for their aspirations and activities for the Dharma through their earnest involvement in the field of translations. His Holiness emphasized that such endeavors fulfilled His and the vision of His predecessor for the spread of authentic Dharma all over the world and expressed His aspirations for the continued flourishing of the Translator’s Course. His Holiness expressed His conviction that all languages had the capacity to awaken one’s inborn qualities and therefore translations was an essential key to unlock the inborn qualities of all on the path of Buddhism. However, His Holiness remarked that a proper education in the source languages of classical Tibetan and Sanskrit was an authentic starting ground.
After the official ceremonies, His Holiness the Gyalwa Karmapa, along with Jigme Rinpoche and Professor Sempa Dorje shared a celebratory lunch with the entire gathering which marked the auspicious conclusion to the Translator’s course 2012.