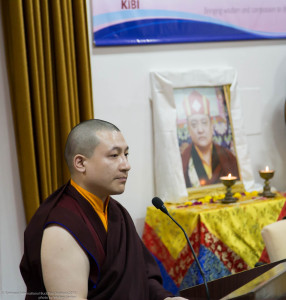 April 12th marked the completion of the first official year of the fully accredited Bachelor of Buddhist Studies degree program. A closing ceremony, which also commemorated the third-year anniversary of the formation of KIBS, was held to mark the occasion. The ceremony was honoured by the presence of chief guest, His Holiness the 17th Gyalwa Karmapa. Also in attendance were the director of KIBI, Professor Sempa Dorje; the Vice-President of KIBS, Dr Tsewang Gyatso; former director of KIBI, Venerable Khenpo Chodak Tenphel; KIBS Executive Members; KIBI faculty and staff; students and guests.

The program began with His Holiness lighting a ceremonial lamp and offering a katag in honour of Kunzig Shamar Rinpoche, who passed away in June last year. Dr Tsewang Gyatso, vice-president of Karmapa International Buddhist Society (KIBS), welcomed attendees and began his welcoming speech by acknowledging Shamar Rinpoche’s contribution to the KIBI. Shamar Rinpoche was the person who materialized the 16th Karmapa’s dream of establishing an educational institute for Buddhist studies and developing an academic program. For over 30 years, from 1990 until he passed away, Shamar Rinpoche worked tirelessly for the establishing of KIBI. Dr Gyatso stated that through united effort, those involved in the work of KIBS are adding a new glorious chapter to the history of KIBI.

Dr Lara Braitstein, principal of the institute, gave an update on developments related to the academic program that took place over the year. The highlight of the year was, of course, the accreditation of the academic program, which was achieved through KIBI’s collaboration with Mewar University. There are many advantages to having the program accredited; for example, the degree will now be recognized by universities around the world making it easier for students to have their qualifications recognized and to advance on to postgraduate programs. It is also easier for students to obtain student visas to study in India. Dr Braitstein gave a special thanks to Mewar University for having confidence in KIBI, and to Khenpo Mriti for his tireless effort in working towards the accreditation of the program. Dr Braitstein also noted that before Shamar Rinpoche passed away, he expressed how satisfied he was with the developments in education that were taking shape at KIBI. Another positive outcome for the academic program was that students in the second year of the program had their first-year results credited towards their degree. None of this could have taken place without the financial support of KIBS Europe and Karmapa Charitable Trust, for which KIBI is extremely grateful.

In a way that warmed the hearts those present, His Holiness concluded the ceremony with a speech that acknowledged the loss of our great teacher and guide, Shamar Rinpoche, and expressed a deep appreciation for all that he contributed to the world. His Holiness urged us that it is very important that we remember Shamar Rinpoche’s contribution because all of his energy, aspirations, and intentions – all the activities of his body, speech, and mind – were for our benefit. Everything he did was so that we may find lasting peace and a deep understanding of the nature of how things are. His Holiness said that the benefit of his activities not only touches our current life, but all of our future lives, until the moment we attain enlightenment. He therefore encouraged us to demonstrate our appreciation of Shamar Rinpoche’s kindness by engaging in dharma practice, the practice of wisdom and compassion, which streamed from the teachings of Buddha Shakyamuni through our precious lineage masters, including Shamar Rinpoche, to us here now.

His Holiness said that another way of appreciating and remembering the kindness of the teacher is through the activities that we engage in and the merit we accumulate through them. The work of KIBS is an example where everyone, students and administrators alike, have through various means enabled the passing on of Buddhadharma through education at KIBI. His Holiness encouraged everyone to continue their activities and said that it was very encouraging and heart-warming to see the wishes of his predecessor the 16th Gyalwa Karmapa and Shamar Rinpoche being fulfilled. He thanked everyone involved for their tireless effort in making it possible for dharma students to study at KIBI, and thanked the current students for absorbing the precious Buddhadharma. In concluding his speech, His Holiness made an inspiring remark about the profound and far-reaching implications of the activities taking place at KIBI, reminding us, as he so often does, of how important our actions are in a system so much greater than ourselves: “This is not just an ordinary activity that we are holding here. It is going to benefit countless people, countless beings. It might not be visible, but it is going to benefit everyone.”

The program ended with a minute of silence honouring Shamar Rinpoche and his profound contribution to KIBI, to his network of devotees around the globe, to the world at large.