An open appeal: the spiritual and historical legacy of Kunzig Shamarpa and Nepal 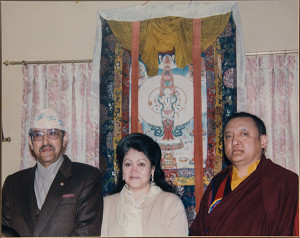 The spiritual connection between Kunzig Shamarpa and Nepal is a long-standing historical legacy dating back to centuries of established ‘karmic’ bonds.

The genesis of Shamarpa, as the Red Hat lama of Tibet, originated in the 10th century in his birth as a Nepali citizen named Kumar Gupth born in Patan, Kathmandu. Kumar Gupth received many important Vajrayana transmissions from the Acharya Pani, the Archarya of Patan, who was an eminent student of Marpa – the founder of Kagyu school of Tibetan Buddhism. Even to this day, the Vajrayana lineage of Acharya Pani is thriving in Nepal.

Later on, Kumar Gupth travelled to Tibet due to his immense devotion to Milarepa, the most celebrated yogi of Tibet. And thus, began his auspicious spiritual linkage with Tibet that would benefit countless sentient beings through the ages. Today, this auspicious legacy of Kumar Gupth endures in the exceptional devotion of the Newari community to the 14th Shamarpa Mipham Chokyi Lodro who passed away on 11th June 2014.

While the earlier Shamarpas were born in Tibet, their relationship with Nepal was nurtured with spiritual links and enriched through all generations of the Shamarpa emanations up to the present day. As a historical highlight, in the 17th century, the 8th Shamarpa Palchen Chokyi Dondup was born in Nepal at Yelambhu (popularly called Yolmo) during the reign of the King Mahendra Singh Mallah of Nepal. The descendent of the 8th Shamarpa still exists today and maintains deep ties and devotion to the 14th Shamarpa. The 8th Shamarpa visited Nepal on numerous occasions and is well know for contributing and restoring many of the famous stupas of Kathmandu.

In the 18th century during the reign of King Prithivi Narayan Shah, the 10th Shamarpa Chodrup Gyatso was the most widespread spiritual influence on the whole of Nepal which also included the period of time covering the reign of King Bahadur Shah. The ruling monarchs extended many invitations to the 10th Shamarpa to visit Kathmandu and sought his counsel and spiritual guidance on all matters, public and private, spiritual and temporal. The 10th Shamarpa performed numerous pujas and blessing ceremonies for the people of Nepal. When he passed away in 1792, his cremation ceremony was conducted in Boudhanath, Kathmandu in Nepal, although he was a Tibetan. The ceremony was graced by the Nepal Royalty and attended by a multitude of Nepalese.

The 14th Shamarpa Mipham Chokyi Lodro, although born in Tibet, also maintained and further strengthened this auspicious spiritual legacy with Nepal. At the age of five, when the 14th Shamarpa departed from the ongoing turmoil in Tibet, a famous Nepali Merchant named Gyan Jyoti, fondly referred to as ‘Shamo Karpo’, received and attended to the whole Shamarpa family and entourage at his Bajuratna Kothi residence. Mr. Jyoti was an ardent disciple of the 16th Karmapa and Shamarpa.

One of the first responsibilities that the 14th Shamarpa undertook after the completion of his Buddhist education was to travel to Nepal as the representative of the 16th Karmapa. During this time, he established and renovated many monasteries in Nepal, and in particular his monastery at Swayambhunath, Kathmandu. The 14th Shamarpa also went to great lengths to renovate all the monasteries and cloisters adjoining the Swayambhunath stupa. He deepened the relationship between the Karma Kagyu order of Tibetan Buddhism and Nepal with numerous meetings with His Majesty the late King Birendra and his government officials in Nepal. He conducted many pujas and empowerment ceremonies for the welfare of Nepal in his capacity as the Guru of a sizable population in Nepal, encompassing many communities such as the Newaris and theYolmos.

The 14th Shamarpa also actively contributed to the social and economic improvement of the people of Nepal by extensively supporting many charitable and social organizations. In 2007, the 14th Shamarpa also initiated the establishment of Shar Minub – a Buddhist institution of research, higher studies and spiritual retreat that can accommodate more than a thousand students, to benefit future generations of Nepalese through the gift of Buddhism. Fulfilling the 14th Shamarpa’s wishes, Shar Minub is designed according to traditional Nepali architecture and aesthetics. In 2011, the 14th Shamarpa initiated the public Ceremonial for Peace in Patan, Kathmandu, which was attended by more than one hundred thousand people.

While proper legal procedures were observed and permission obtained to transport Shamarpa’s sacred mortal remains to Nepal, the sudden order of retraction by the Home Ministry of Nepal has deeply saddened his disciples worldwide, and especially his Nepalese disciples. Moreover, such a move would deny the Nepalese disciples the opportunity to offer their last personal homage to the sacred remains of their dear Guru.

The 14th Shamarpa is renowned for being avowedly non political.This is in keeping with the historical traditions of the Karmapas and Shamarpas. In all of the more than 900 Buddhist centers, monasteries and institutions they have founded all over the world, they have always emphasized that Buddhism was beyond politics of any worldly kind.

During his lifetimes, the 14th Shamarpa was greatly facilitated by the Nepalese government authorities to contribute to all aspects of life in Nepal. Therefore, this present decision refusing to allow for the cremation of his sacred mortal remains in Nepal comes as a shock to his followers all over the world, and is especially a great loss to all his Nepalese disciples.

May we humbly submit that from a Buddhist perspective, the cremation of such a universal Buddhist teacher will uphold and enhance the national merit of Nepal as the auspicious land on which the Buddha himself was born. From a legal perspective, all due process has been observed from the outset. And, from a humanitarian perspective, for the sake of all of Shamarpa’s Nepalese devotees, we earnestly request your good offices to respect the final wishes of a true Bodhisattva.