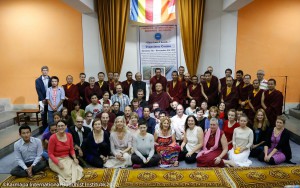 Rinpoche began his address with a wide overview about the establishment of KIBI. Rinpoche outlaid the tribulations that went into the successful inception of KIBI as a result of years of painstaking efforts. As a fruition of the vision of His Holiness the XVIth Gyalwa Karmapa, Rinpoche expressed his satisfaction as KIBI was now actively functioning in fulfilling the noble aspirations of His Holiness for the establishment of Dharma in the world.

Under the supervision of Professor Sempa Dorje and the management of Karmapa International Buddhist Society (KIBS), KIBI has now been successfully established as a registered education institution in India. However, after considered consultations with eminent educationists from all over the world, KIBI was now working towards the active goal of achieving accreditation with the Education Ministry of India. This would have far reaching benefits as accreditation would enable students from distinguished universities all over the world to pursue higher education in in Buddhist philosophy and Buddhist related fields in KIBI.

Rinpoche then delved into the historical underpinnings of the spread of Buddhism. Emphasizing the far-sightedness and the exercising of ‘accurate judgment’, Rinpoche extolled the outstanding seekers of truth who descended into India in the 1950-60s.

Rinpoche commended all who flocked into India in the 1950-60s to be agents of spread of such a rich philosophy to their world; from Russian artists, thinkers from Europe, Gene Smith of USA, the prince of Denmark and many others. Rinpoche remarked that their contributions would reap rich benefits in all the times to come as they pursued their involvement in Buddhist philosophy and the ethical code of Buddhist with commendable and in-depth passion.

Rinpoche also washed over historical events such as the cultural phenomenon of the ‘hippie movement’ which overshadowed the serious efforts of early Buddhist scholars and seekers. While commending the the ‘hippie’ movement and its chief proponents such as John Lennon and the like for their idealism, Rinpoche remarked on the short sighted consequences of the ‘be happy new age-y’ philosophy, easy going, and shallow approach of the hippie movement. Rinpoche then re-emphasized that in the long run, the sustained contributions and noble aspirations of serious seekers, scholars and thinkers would bear rich fruits for all the times to come.

Rinpoche then answered questions from the audience and concluded the teachings. Thereafter, he visited the KIBI premises and oversaw the functioning of the various departments of KIBI.

Khenpo Mriti informed the students about the broad structure of the month long program which would encompass three weeks of scriptural grounding and conceptual instructions and culminate in a final week of retreat which included the traditional ‘Sojong’ practice.