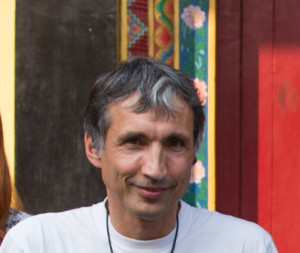 Dr. Michael Kalff was KIBI Student from 1993 to 1997, lives in Staufen, Germany. He practices in Dagpo Center Freiburg and Diamondway Center Stuttgart, teaches Buddhist Philosophy and works as scientist for sustainable development at HFT Stuttgart.

From 1993 to 1997, I was a student at the Karmapa International Buddhist Institute. Holding JUST a diploma degree in Germany and having practiced Dharma for one year only, I was a typical ‘angry young man’, who liked to challenge authorities and question the rules.

However, I had an insight on the necessity to work on myself and to become a solution to people rather than a problem. I was on the search of an authentic spiritual path. Gendun Rinpoche had inspired me a lot by his realizations and Lama Ole Nydahl by his modern style of teaching! It was him, who recommended me and my then wife Sarah to ho to KIBI in order to get answers to all my questions in life.

After much thinking, we decided to give our flat in Black Forest, to the students for the winter. We booked our tickets and flew on our adventure to find the answers to all our questions in life starting October 1993. My first brush with India wasn’t what you’d call a love affair. Delhi was a nightmare! After the first day of cultural shock in Delhi, I caught Dengue fever and was on bed rest for the first week at KIBI. There were no mobile phones then, no internet no e-mail! Germany was six weeks away: the time, a letter took to arrive! Rs. 18 were 1 Deutsche Mark and a phone call of 10 minutes to Germany was about Rs. 250 or 14 DM. In all these years, I had a lot of dreams with green hills and clear water. I missed the forest and it’s clean air a lot! But I caught on, and started enjoying the Delhi sunshine.
We got three one-hour-lectures a day, held in Tibetan, translated by Tina Draszyk or Hannah Nydahl in philosophy, Tsema and Tibetan. The first year program was Gateway to Knowledge and Tsema Rigter. Manfred Seegers spent his afternoons giving review classes. The Tibetan program was started all over again by experienced western students, because the old style of teaching Tibetan would fit for Tibetan school kids, but not for adult westerners. The other lectures were traditional too! At the beginning of the lecture the teacher would recite the text, stanza by stanza and quote commentaries to that stanza from different authors. After some time I started to interrupt this style of teaching by asking questions, when I was not able to understand or when I felt there was something wrong (both happened quite often, because I had confused ideas). That was revolutionary… nobody dared to interrupt the holy teachings before, so as you can imagine, I got some critical commentaries by my fellow students.
However, it was junior Khenpo Tsultrim, our Tsema teacher, who saw the chance of my approach to learning. So instead of reciting the old debates from the texts he used me as a “victim” to refute all the wrong views one can have in Samsara – and I had all of them! The debates brought life to the lectures. That was great joy, because Khenpo freed me of a lot of misconceptions, and together with Jim Rheingans, Frank Müller-Witte, Jörg Dieter and others from my class we would go on debating the subjects at lunch or dinner in the dining hall. We loved those sessions, because they helped us to gain deep understanding. Our KIBI teachers shifted gradually to more modern styles of teaching! Though, when the debates got detailed the translators had a hard time!

The most important event of our first year at KIBI however was the return of the Gyalwa Karmapa to his Kagyus. Rumors about this started in January, and at some time in February we got adviced to prepare for a meeting with him. One Sunday morning before Lossar, monks ran through KIBI to wake up everybody, and by taking some buses, crisscrossing through Delhi we reached a public park (I still have no idea exactly where). Guess who was already waiting on a camping chair? The 11 year old boy smuggled out of Tibet, hidden from the Chinese in Delhi, now meeting his disciples for the first time in this life – THE Gyalwa Karmapa!

A hundred monks lined up for blessing, 50 westerners behind, but Indians around did not seem to pay extra attention because probably they are used to unusual shows. This boy was special: he did not notice all the toys offered to him so much (remote controlled cars, telescopes), but just kept thanking devotees and concentrated fully on blessing the people. We were very lucky to be present at that occasion. In March 1994 the official welcome ceremony with many guests took place at KIBI, which we students helped to prepare. The attacks by Tai Situpas monks proved those preparations to be really necessary.

In later years we were lucky to receive teachings from Khenpo Chödrak, Togpa Rinpoche, and the great Shamarpa in KIBI. Lama Ole showed by once a year, giving a lecture, too. Soon, things started transforming. We saw internet coming to India and to KIBI, we helped to set up a computer room for students and monks. That was a change because the distance to Germany was from now on, the “enter” key only, to send a massage. We students took charge of the library, and moved it down from the 4th to the 3rd level (in one day only!). I remember, we also had our common Friday night event after each week of Dharma studies – cinema at Vasant Vihar (which had more than 3000 seats in one huge hall). We went there to watch the latest Schwarzenegger blow ups, to take Nirula sandwiches and ice creams in the break (when they had to change the film rolls). “Nirula Rinpoche” inspired our class to the famous ICE EATING SUTRA which we performed at one of the famous student parties. They took place, where the auditorium is now. The later years saw the development of the “No Mind School of Thought” with it’s four principles and two truths… you may ask KIBI alumnis for more details! Of course there was a secret nightlife at KIBI too, (what sometimes should have been more secret, than it actually was), but such things happen, when people are young and when there is a lot of inspiration!

What KIBI gave, was a very deep understanding of the Dharma in the Kagyu interpretation, a stable basis for meditation practice, and an unshakable value system for profession and private life. Often I tell my fellow Buddhists, that KIBI changed me into a civilized (and hopefully even useful) member of society. The greatest joy however is to share the gift, we got from our teachers at KIBI. Therefore, Sarah and I started giving classes on Buddhist philosophy in education centers, and now I am teaching Buddhist Philosophy in Buddhist groups and Dagpo center Freiburg since a few years.

The quality of KIBI education seems to pass on – students of the Freiburg philosophy class wanted to know the roots of the program they study, so we arranged a trip for Kagyus to KIBI and Bodhgaya. Coming back to KIBI, 17 years after, is somewhat emotional… realizing what KIBI gave to me through these 17 Years … seeing all the changes (and what did not change) touched me a lot. There is a cyber center and a monk now (Lekshay Jordan), who runs the IT department, there is a Dharmashop and an information center, KIBI became the main seat of Gyalwa Karmapa, and more importantly: there is an official, professional Bachelor study program now, integrated in the international system of university degrees. India is still how it was and Delhi a nightmare to health and nerves… but it is much closer to Germany now. The main thing however, to say after all these years is: to study Dharma at KIBI was and is worth it every single day!