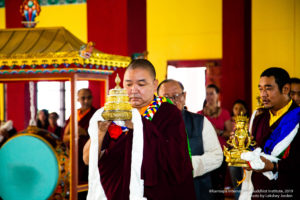 On the 6th of May 2019 marks the 36th birthday of His Holiness the 17th Gyalwa Karmapa, Trinley Thaye Dorje, the supreme head of Karma Kagyu Lineage.

On behalf of all sentient beings, We wish you a Happy Birthday, Gyalwa Karmapa!

The Karmapa’s birthday was celebrated joyfully across the Karma Kagyu centres worldwide. This auspicious occasion was also commemorated at the Karmapa International Buddhist Institute (KIBI) by the saṅgha, dharma followers and local disciples. The celebration started with a traditional ceremony of a maṇḍala offering, which was led by Prof. Sempa Dorje, Ven. Nendo Rinpoche and devotees. It was accompanied by the recitation of the long life prayer as well as the serving of saffron rice and butter tea. Next, the smoke offering puja and grand gaṇacakra (tsok offering and spiritual feast song) were performed. Finally, a delicious meal, tea party and birthday fun quiz; which was won by Lopon Gompa Tashi’s team, concluded the day.

As he was born in the year of the pig, currently is the ‘year of obstacles’ for His Holiness. In order to avert temporal obstacles, prior to the birthday, KIBI saṅgha held three days of puja: the puja of the protector Mahākāla along with a gaṇacakra, followed by the complete recitation of 12 volumes of Prajñāpāramitā (bum or yum) texts (May 03 – 05). Earlier, during Jan 21 – 23, various other pujas such as the Gya-zhi (Four hundred offerings), Sher-nying Dud-dhog (the Heart Sutra Ritual), DrolmaYuldhog (the Tara who wards off invasions) and Zangchö Mönlam (the King of Aspiration Prayers: Samantabhadra’s Aspiration to Good Actions) had already been performed for the aspirations of His Holiness’ longevity.

Other meritorious deeds that KIBI saṅgha engaged in comprised of releasing lives of more than 10,000 fish at the bank of Dasna Massoorie River and 50 beautiful parrots into Sanjay Forest (an important Buddhist practice is to save the lives of animals that are due to be slaughtered by buying them and setting them free). The charity program was held at the Blind Relief Association, Delhi, included the provision of three scholarships and serving food to approximately 250 differently abled students. As an auspicious connection, today Ven. Nendo Tenam Rinpoche and Skarma Ishey Jungnes (General Secretary KIBS), launched the newly released volume of the KIBI magazine Knowledge In Action: KIBI Annual Report – 2018/19.

For the sake of the lineage and benefit of all sentient creatures, may you live long, Your Holiness! 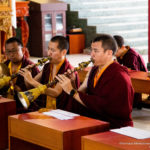 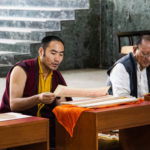 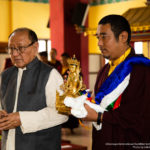 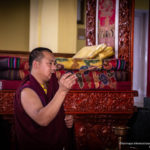 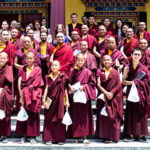 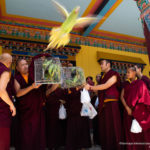 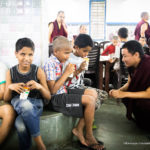 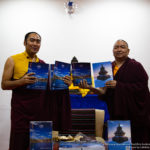 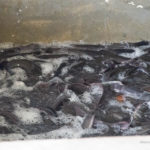 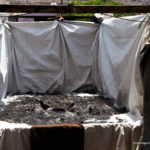 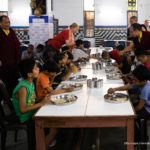 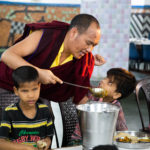