The Republic Day of India 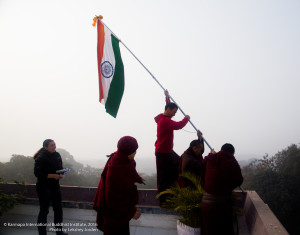 On Tuesday, January 26, 2016, KIBI celebrated the Republic Day of India. This national holiday commemorates the day when the Indian constitution came into force on 26th January 1950, after India gained its independence from British rule in 1947. The monks, administration, and students of KIBI showed their solidarity with and appreciation to their host country by assembling on KIBI’s roof at 9am, reciting aspiration prayers for the prosperity and well-being of India and her people, and singing the Indian National Anthem “Jana Gana Mana” while hoisting the National Flag.

After the ceremony and prayers, the participants met in KIBI’s cafeteria for tea, coffee, and snacks to celebrate.