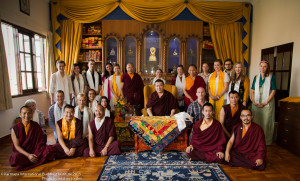 On Monday, September 7, 2015, KIBI’s Academic Year 2015/16 officially began. For the first time there was a ‘Orientation-Week’, time set aside for the students to get all their formal paperwork and registration done without having to miss any classes.  In addition to this, it was also a week full of opportunities to get to know more information, get to know each other, KIBI, and Delhi.

After the opening ceremony on Monday (see last post), many exciting events followed. Tuesday began with an introduction to the library by our librarian Katrin Becker.  Afterwards, students and faculty went on an excursion into Delhi together. First everyone went to the National Museum where they gathered around the relics of the Buddha. There was enough time to pay respect to the relics and then explore the museum, learning about Indian history and culture. The next stop was the historic India Gate, and finally they visited Akshardham, a beautiful Hindu temple where the evening concluded with an impressive water-laser show.

On Wednesday, Khenpo Tsering Samdup was kind enough to explain the Manjushri Prayer to the students in an engaging and inspiring way. This prayer will be recited at the start of most classes in KIBI, and Khenpola reminded everyone of the great benefit of making it part of one’s daily practice.

On Thursday we made another excursion, this time to the historical landmark Qutab Minar. Since it is within walking distance from KIBI, it was a great opportunity for a stroll through Sanjay Van, the adjoining forested park with its lush vegetation and manifold wildlife.

In the afternoon the first student meeting of the semester was held. The students elected Karen Franco and Magda Jungowska as their representatives for this year. On Friday, Bettina gave a helpful talk on how to stay healthy and safe in KIBI and India. In the evening, most of the students decided to use the time for a ‘Student’s night out’ at City Walk mall (or Paradise of Delhi as I heard someone call it).