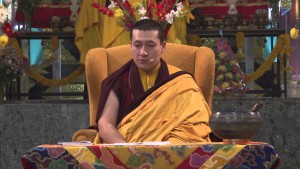 The aim of Buddhist practice is to achieve liberation from samsara. The basis of this is correct ethical behavior, rooted in what are called the vows for the individual’s liberation, i.e. the Pratimokṣa vows. In addition to including the vows for monks and nuns, these also encompass the Upāsaka- or Upāsikā vows (lay practitioners). Strictly speaking, one distinguishes between four types of Buddhist practitioners, depending on the type of vows for the individual’s liberation:

As it is possible to make mistakes when maintaining vows, there are various methods in Buddhism to purify oneself of these faults. One of them is the practice of Sojong. This Tibetan word, literally translated, means “purifying and restoring”.
The following instructions for the Mahāyāna Sojong are meant for Upāsikās and Upāsikās as practice on full moon and new moon. However, in the Mahāyāna it is possible to take the one-day Sojong-vows solely on the basis of the refuge, too, i.e. even without having taken the Upāsaka- or Upāsikā-vows.
In addition, practitioners with celibacy vows (i.e. Bhikṣu, Bhikṣuṇī, Śikṣamāṇa, Śrāmaṇera and Śrāmaṇerikā), who have their own form of Sojong in connection to their Pratimokṣa-vows, can practice this Mahāyāna-Sojong to purify themselves of faults which are connected to the Bodhisattva path.
In Mahāyāna Buddhism, on the basis of Bodhicitta, keeping the eight Sojong vows is often combined with the practice and recitation of certain sūtras. This is a highly effective method to purify oneself of negative karma and to reinforce and stabilize one’s orientation towards virtue.
The Sojong vows are taken with the intention to keep them the same way the Arhats kept them at the time of the Buddha. It is said that in particularly difficult times such as ours, when the teachings of the Buddha are gradually vanishing, it is especially meritorious to keep the one-day Sojong vows in an impeccable way.

The Vows and their benefit

By taking the Upāsaka- or Upāsikā-vows, a practitioner becomes a member of the Buddhist Sangha. In this context, two groups of Buddhist practitioners are frequently mentioned: those who live in celibacy and the Upāsaka / Upāsikā. The latter are sometimes also called the ones dressed in white.
The Upāsaka-vows entail the five śīlas, i.e. one vows not to kill, not to steal, not to lie, to refrain from sexual misconduct and not to take any intoxicating substances.
By taking refuge, a Buddhist practitioner has already consciously decided to give up negative deeds in order to avoid future suffering due to his or her own behavior. Taking the Upāsaka- or Upāsikā-vows reinforces the virtue that arises through this mindfulness in one’s conduct, and it is therefore very precious for the practitioner. The vows are also an expression of training in renouncing cyclic existence, which is the indispensable basis for a profound development towards liberation and Buddhahood, the enlightened state.
The way of life based on the Upāsaka- or Upāsikā-vow is thus the basis for the Buddhist path. This is even more true for the path of a bodhisattva — as it is only possible to help others on this basis. In addition, keeping ethical discipline is a vital condition to obtain rebirth as a human being or a god in future lifetimes, which is conductive to further spiritual development and to go on living in an ethically positive way.
The Upāsaka-vows should be taken without being influenced by kleśas, i.e. obscuring states of mind, and without the aim to obtain pleasant results or advantages for this or future lifetimes. As a Mahāyāna practitioner one should also be motivated by Bodhicitta — the wish to help all beings to achieve Buddha, the enlightened state.
The good which results from keeping the vows means that one will turn to the Dharma more and more and that one will gradually become a real Dharma practitioner; the mindfulness developed due to the vows has the effect that kleśas and deeds which cause suffering will be recognized as such. This is the basic condition to overcome negativity and is therefore invaluable for spiritual development.

As an Upāsaka or Upāsikā one either keeps one, two, three or all of the following five vows:

How the Upāsaka or Upāsikā Vows are Broken or Damaged

The vows are broken when, in performing one particular deed, four particular factors come together. For example, the vow not to kill is broken if the following applies:

The One-Day Eightfold Sojong-Practice of the Mahāyāna

As already mentioned, any practitioner who has taken refuge can use the sūtras and texts compiled here in order to practice the Mahāyāna-Sojong (Sanskrit: Poṣadha) and thus derive great benefit with relatively little effort as it is not difficult to keep the Sojong vows for the length of one day and one night.
In various Mahāyāna discourses, the Buddha advised the Upāsaka and Upāsikā to take the eight Sojong vows at full moon and new moon for a period of 24 hours. Later great Buddhist masters also repeatedly recommended the practice of the Mahāyāna Sojong to their disciples.
The reason for the strong emphasis on this practice rests in its great benefits. It is not only a very effective method to purify oneself of damage in relation to the Upāsaka-vows, but in addition it is of great benefit for the practice of the Bodhisattva- and the Vajrayāna. If the Sojong vows are taken and maintained with the motivation of Bodhicitta, they can also clear away minor damage in relation to the Bodhisattva-and the Vajrayāna vows.
The Sojong practice for Upāsaka or Upāsikā in the Mahāyāna derives from the type of Sojong practice given by the Buddha in the Vinaya discourses for monks and nuns, who were encouraged to practice Sojong at full moon and new moon in order to purify damage to their vows. The Sojong practice for monks and nuns, as well as the one for the Upāsaka and Upāsikā, results in the strengthening and stabilizing of virtue in the mind stream of the practitioner. By taking the Pratimokṣa-vows, virtue arises in the mind which remains by keeping the vows, as long as the vows are not broken. Damage which does not break the continuity of the vow completely, but merely impairs it, weakens this virtue thereby diminishing the positive effect of the vows. This damage is purified by the practice of Sojong thereby enabling the unhindered continuity of virtue.

How to take the eight Mahāyāna Sojong Vows

The vows are taken at dawn when there is enough light to see the lines on the palm of one’s hand. They should be taken either in the presence of a spiritual teacher or in front of a symbol of the Buddha, i.e. a statue or a picture. It is best to take the vows as a group because this enhances the harmony of the particular sangha.  It is, however, also possible to take the vows alone.

The Sojong vows are taken as follows: