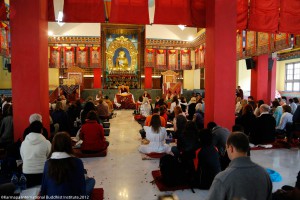 His Holiness the XVIIth Gyalwa Karmapa Trinley Thaye Dorje presided over the conclusion of the Shamatha Meditation Course at the Karmapa International Buddhist institute (KIBI) on 5th December 2012.

The closing ceremony was graced by Venerable Dupsing Rinpoche and all the principal teachers of the course. In attendance were the 137 registered students of the course and an assembly of about 70 disciples and devotees.

The ceremony also marked the end of the seven day Sojong Retreat which was conducted in the culminating week of the month long course.

The monks of the KIBI sangha then led the assembly in collective aspirations starting with Aspiration Prayer of Samantabhadra followed by other auspicious prayers.

This was followed by a traditional Mandala offering conducted by Khenpo Mriti along with Professor Sempa Dorje in symbolic gratitude and collective aspiration for the long life of His Holiness.

His Holiness began his address with words of appreciation for the gathered students from about 50 Buddhist Centers in the world. Pertinently, His Holiness cited the course as the firm foundation of the spiritual journey and imparted an assortment of invaluable instructions and practical advice to the students.

At the end of the ceremony, the student and KIBI administration representatives manifested their heartfelt gratitude to all the teachers of the course with myriad offerings.

The celebratory atmosphere was captured in the traditional group photograph in the sprawling courtyard of KIBI and followed by a sumptuous lunch thereafter.

The celebrations continued well into the evening.