What is a Good Practice to Start With for People Who are New to Tibetan Buddhism? 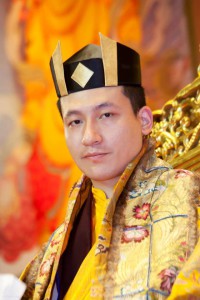 Traditionally, when you begin Tibetan Buddhist practice, you take refuge in the Three Jewels, and start with the preliminary practices. But personally, I feel that if one is truly starting from step one, you must first have this attitude: ‘I want to be decent. I want to draw from the Inner Wealth within.’ This is the foundation upon which you can then follow the traditional aspects of the practices that are offered.

The first step is reflection. Knowing that this Inner Wealth lies inside you, you may reflect on your own consciousness and try to see if there is an innate sense and understanding of cause and effect, an innate sense of aspiring for truth and peace. If we discover these things, then this is already the first non-traditional practice on the Tibetan Buddhist path.

To cultivate this Inner Wealth more, you can then begin with all the traditional practices, reflecting on questions that are grounded in logic and reason.

For example, is it logical that if you want to learn something, you must learn from someone who is experienced, and follow their path? Is it logical to have a great, positive attitude? Is it relevant to have decency, be it in the way you think, the way you talk, and the way you behave? Does intention matter more than what you do?

If all these seem reasonable and logical, then it is already a step on the path to realising more of yourself and tapping into your Inner Wealth.

Then, you may also examine the traditional aspects of the practice, for example the Theravada, Mahayana and Vajrayana traditional practices, and see if each one resonates with your own logic and reason, like the questions I just mentioned. By doing this, you won’t just blindly jump into a way of life.

Otherwise, if you don’t do any of these things at the beginning, then you may face the problem of feeling that you have to adapt yourself to something completely new. Then it becomes a little bit unnatural. From time to time, or even from the start, you might have the feeling that it’s not really according to your nature, according to your constitution — you’re just adapting.

Let’s say you are born and raised in the city and then go to live on a quiet, remote island. You could try very hard, but it would be a struggle to adapt. After some time it will still not be easy — it is not easy at the beginning, it won’t be easy in the middle, and it won’t be easy at the end. Because in every aspect, you feel that you have to adapt to something that is not really in accordance with your nature.

So in a similar way, you may have a sort of allergic reaction against the practice – which is not good! So instead, to adopt rather than adapt, you have to relate to it as if there is already an inherent connection. Like for example, I am a Tibetan, but there is an inherent connection with East, West, South or North, simply because I am a human being. So in that way there is no difference at all. And then, just like that, there are so many similar things. There is no need to adapt!

I am saying this because I think there is a risk or a danger, which is passive but has a lot of weight. It arises when one feels ‘I am a human being, so I have emotions, and that’s who I am. So why do I have to try to actually remove those emotions? If I do that, then I might just become a machine. And if spirituality is meant to do that, then do I really want spirituality?’

While the logic of this thinking is correct, it is applied in the wrong way. Emotion is not a part of you, it is just a temporary habit. You are not inherently angry, or inherently any emotion. Emotions pass. The path to spirituality is about discovering your true nature, tapping into your Inner Wealth.

Understanding this point, almost automatically negates the idea that spirituality or practice is a way to alter a person’s true nature.

For these reasons, reflecting on our motivations, logic and reasons for practicing are important non-traditional first steps, before setting out on the more traditional Tibetan Buddhist path.