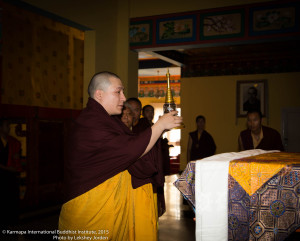 According to the Tibetan calendar, Sunday, May 31, 2015, marked the first anniversary of Kunzig Shamar Rinpoche’s passing.  On this day, His Holiness the 17th Gyalwa Karmapa, many venerable Rinpoches, respected guests, Lamas, representatives from monasteries and dharma centres around the world, ordained sangha, and lay devotees gathered to mark this solemn occasion with an auspicious ceremony.  First His Holiness Gyalwa Karmapa installed the precious bone relics of Kunzig Shamar Rinpoche at the central shrine in the lhakhang.  This was followed by a recitation of prayers, then deeply moving speeches by Professor Sempa Dorje, Ven. Jigme Rinpoche, and finally His Holiness Gyalwa Karmapa.  After the ceremony finished, the honoured guests were invited to enjoy High Tea. Later in the evening, Rinpoches, Lamas, ordained sangha and lay devotees gathered again in the lhakhang to recite Calling the Guru from Afar.

This year, the most sacred day in the Tibetan calendar falls on June 2.  It is the full moon day of Saga Dawa (the 15th day of the fourth Tibetan month).  Not only does this day mark the birth, awakening, and parinirvana of the Buddha Shakyamuni, it is also the anniversary of the day that Kunzig Shamar Rinpoche left tukdam and entered parinirvana.  From June 2-7, there will be continuous recitation of the Cakrasamvara puja at KIBI.