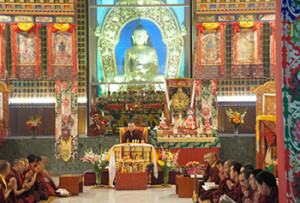 Karmapa International Buddhist Institute celebrated the Tibetan Losar (New Year) of 2141 Tibetan Male Wooden Horse Year, which falls on 31st January 2014 according to the Tsurphu calendar. Another reason for celebrating the New Year in advance was because Gyalwa Karmapa has been invited by his Sikkimese and Kalimpong devotees for the common Tibetan Losar on 2nd March 2014. The Losar preparation started two days earlier with a Grand Mahakala Puja.

The celebration took place at the KIBI dhukhang (function hall) at 7 in the morning. KIBI staff, students and guests gathered in the hall, dressed in their best. H.H. Gyalwa Karmapa opened the ceremony by lighting a lamp and offering a khatag to the Buddha’s image. Led by Professor Sempa Dorje, director of the institute, the sangha recited auspicious prayers and offered mandala and khatags to H.H. Gyalwa Karmapa. Auspicious rice and tea were served at the gathering. H.H. Gyalwa Karmapa then addressed the audience with a speech. He conveyed greetings to all his devotees who celebrated the New Year on that day. At 9 a.m., the official ceremony concluded with aspiration prayers for world peace and harmony, and the fun started with sports games and official lunch for everyone.

There were around 100 devotees who participated in the ceremony to mark their New Year as well, as that day was not only the Tsurphu New Year but was also the New Year for those in other parts of the Himalayan region, the Chinese and Koreans.

Aside from the traditional Losar ceremony, as per Gyalwa Karmapa’s wish, KIBS conducted a charity activity on the auspicious day by distributing blankets to the street workers who sleep on the roadside and are struggling with their lives. KIBS also decided to sponsor two of their small daughters so that they could have a chance to go to school.