Conclusion of the Karmapa Public Course, 2015 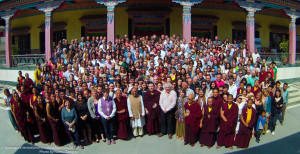 The annual Karmapa Public Course (KPC) at KIBI has now drawn to close. In total, around 400 students from centres all around the world associated with Karmapa attended the course. In comparison to the Public Meditation Course held in December, the Karmapa Public Course focuses on Buddhist philosophy rather than meditation practice. The course offers an opportunity for dharma students who are not enrolled in KIBI’s Bachelor of Arts in Buddhist Studies to nonetheless receive rich philosophical teachings on important topics in Buddhism from Karma Kagyu masters. Feedback for the course was very good, with many attendees stating that the teachings enabled them to deepen their understanding of Mahayana Buddhism. The program was translated into four languages: English, Russian, Polish, and Spanish.

It is a rare opportunity for dharma students to receive teachings from many great masters in the one course. Attendees were especially pleased to receive teachings and empowerments from His Holiness the 17th Gyalwa Karmapa. His Holiness taught on the second chapter – ‘Offerings and Confession’ – of the Bodhicaryāvatāra (Bodhisattva’s Way of Life) by Shantideva. His Holiness also gave two empowerments – Vajrasattva and Avalokiteśvara – and gave a talk on the Buddhist understanding of happiness on the International Day of Happiness. Venerable Lama Jampa Thaye travelled from England to teach on the 5th Shamarpa, Konchog Yenlag’s commentary on Lojong Dondunma (Seven points of Mind Training). Director of KIBI, Professor Sempa Dorje, taught on the life of the Buddha Shakyamuni and sacred Buddhist sites. And finally, Khenpo Mriti gave an introduction to the history of the Karma Kagyu lineage.

At the end of the Avalokiteśvara empowerment on the last day of teachings, teachers and attendees made a request for the long life of His Holiness with a mandala offering. Following this, long-term KIBI volunteer Bettina Haffter delivered a thank you speech on behalf of the KIBI community, thanking the teachers for sharing their precious time and knowledge. Bettina requested that His Holiness continue to teach on the Bodhicaryāvatāra next year and for years to come, and to continue to guide us in our practice. Thanks were also given all staff, students, and volunteers who contributed to the successful outcome of the course. KIBI has now completed 3 years of administration under the direction of Professor Sempa Dorje. Special thanks were given to Kersten Seifert and Silke Neuhaus for their contribution prior to this period, who kept KIBI alive and active from 2007 to 2011 by organizing annual 3-month programs.

On the final evening, there were a number of additional events. The new KIBI website, designed by Anna Guryeva and Alex Savinykh, was launched by His Holiness. Attendees then had the opportunity to view a preview of the KIBI documentary on the life of the late 14th Sharmarpa being produced by Phuntsog Rabten and Sanjay Hegde and their team. The course was concluded with a dinner under the stars held in the KIBI gardens, which was illuminated by hundreds of butter lamps. To the delight of many, His Holiness graced the evening with his presence.