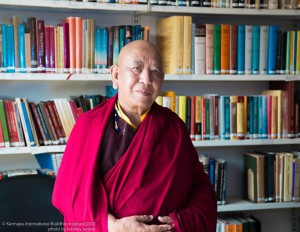 H.E. Choje Togden Rinpoche, a revered lineage master of the Drikung Kagyu, graced the Karmapa International Buddhist Institute (KIBI) with his presence, and had an auspicious audience with H.H. the Gyalwa Karmapa today.

His Eminence later graced the institute premises, and offered butter lamp and bountiful aspirations at the main monastery hall. About H.E. Togden Rinpoche: His Eminence Togden Rinpoche is the Choje (Dharma Master), and the spiritual leader of the Drikung Kagyu Tradition in Ladakh. Chojes were sent from Drikung Thil Monastery in Tibet to places such as Mt. Kailash, Tsari, Lapchi, and Ladakh. Since the previous incarnation of Togden Rinpoche was from Ladakh, it became a tradition that his successive reincarnations would be appointed as the Chojes for Ladakh. His Eminence Togden Rinpoche is revered as the reincarnation of the Indian Mahasiddha Hungchen Kara, who centuries later incarnated as the Kongbo Togden Tulku, a disciple of the 17th Drikung lineage holder Rinchen Phuntsog (1509-1557).