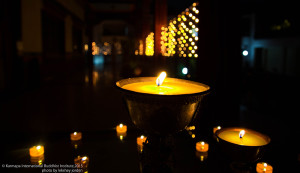 KIBI observed the first day of the ‘Losar’, the lunar new year that ushered in the Year of the Wood Sheep in a series of sacred ceremonies led by His Holiness the Gyalwa Karmapa Trinley Thaye Dorje. The day was specifically dedicated to commemorate His Holiness Kunzig Shamar Rinpoche and marked by prayer ceremonies for his Swift Rebirth. Among the spiritual ceremonies observed was the conclusion of the three day ‘Gyutor’ or Malakala ceremony, followed by ‘Calling The Guru from Afar’, Swift Rebirth sadhanas, and concluded by ‘Marme Monlam’, besides a host of other ceremonies. His Holiness the Gyalwa Karmapa addressed all the gathered congregation about the importance of observing the Swift Rebirth prayers, and highlighted the efficacy of accumulating the collective and inter-dependent merit that would pave the conditions for the swift manifestation of the reincarnation of His Holiness Kunzig Shamar Rinpoche in our midst again.