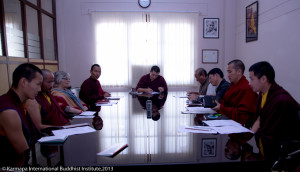 The KIBI Administration meeting was held on the 16th Nov. 2013 at the KIBI conference room. It was presided over by His Holiness Gyalwa Karmapa, President Prof. Sempa Dorje, Vice President Dr. T. Gyatso and other office bearers of KIBI and KIBS.

In the meeting, it was unanimously decided that the Tibetan Losar will be celebrated grandly from the 29th (according to the Tibetan calendar) until the 2nd day of Losar. KIBS has also officially declared its founding day on 22nd March 2014 and will observe that day with some programs.

There is a need to systematize the room allotment in KIBI. Members in the meeting suggested providing adequate facilities required for guests and visitors. Official visits of invited guests will be provided free food and lodging in KIBI whereas, a room rent will be charged on other visitors depending on the type of room.

The date of the teachers training course is rescheduled due to Shri Diwakar Buddhist Institute’s request for their teachers’ availability and vacation. It has also been decided in the meeting to organize a cleanliness drive once a month for the residents of KIBI as a part of an environmental awareness program in order to generate awareness among all KIBI residents and guests concerning the environment.

The original structure and splendour of KIBI should be maintained and other organizations operated from KIBI should also take responsibility of its maintenance. KIBS will organize fundraising activities under the 2014 KIBI Renovation Project for the common bathrooms, etc. as well as the construction of two additional storeys for rooms.