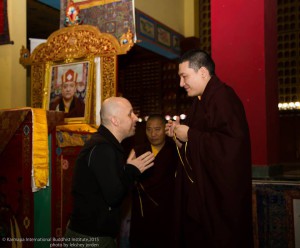 H.H. the Gyalwa Karmapa fulfilled the earnest wishes of two delegations of European pilgrims from Poland and Germany today by granting them a group audience at the Karmapa International Buddhist Institute (KIBI).
The delegation received a short teaching followed by blessing session in the course of their audience with H.H. the Gyalwa Karmapa. The German group of pilgrims had just returned to New Delhi after concluding their pilgrimage of sacred Buddhist sites in the Himalayan countries while the Polish group was yet to commence their pilgrimage.