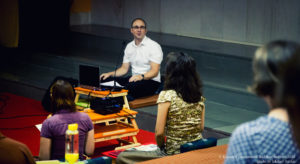 On September 21st 2016, during the visit of Dr. Rolf Scheuermann of the International Consortium for Research in the Humanities (University of Erlangen-Nuremberg), KIBI had the pleasure of hosting an evening with a public lecture on the topic “Coping with the Future – Tibetan Divinatory Practices”.

During this lecture Rolf Scheuermannintroduced different types of divinatory techniques commonly used in Tibet, discussing their classifications and a possible hierarchy of these methods.He further pointed to the fact that similar practices have been used by many cultures throughout the history of mankind. While many forms of divination may generally appear occult to the rational mind, they are still widely used in the modern world (e.g. mathematical predictions of tendencies in the stock market). The lecture concluded with a few remarks on how a comparative approach that examines mantic practices in the East and West can offer insights into the different underlying notions of fate and freedom. In the Tibetan Buddhist context, for example, predictions rarely foretell an irreversible future, but ratherindicate a possible future that can eventually be influenced or changed with the help of different practices.