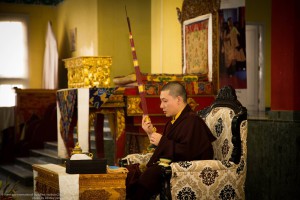 About a thousand devotees from the Himalayas, India and the rest of the world congregated at the Karmapa International Buddhist Institute in New Delhi, to dedicate the Buddha Purnima observances to Nepal in the presence of dignities of the Nepal government. The event was presided by H.H. the 17th Gyalwa Karmapa Trinley Thaye Dorje.

On Buddha Purnima, the most auspicious day of the Buddhist calendar, which commemorates the birth, enlightenment and Parinirvana of Buddha, Gyalwa Karmapa addressed the congregation and emphasized the urgency of spiritual solidarity and material assistance to Nepal in the tragic aftermath of the earthquakes.

Karmapa offered spiritual solace for the victims of the tragedy and stated, “Buddha has shown that it is possible to overcome these forces no matter how powerful they are and the ‘cause and effect‘ of all obstacles.”

KIBI was decked in many symbolic adornments which demonstrate the dedication of Buddha Purnima to Nepal, such as Buddhist flags, relief materials stacked in the courtyard, hundreds of butter-lamps, and a Nepalese flag that adorned a central hoarding placed at the entrance of the monastery, bearing the stark visual imagery of the ongoing tragedies in Nepal.

The huge gathering joined the auspicious ceremonies for the whole day, that commenced in the morning with a series of puja ceremonies. KIBI volunteers distributed food, drinks and ‘prasad’ of Indian ‘kheer’ (sweetened rice delicacy) to all the guests as well as passersby on this august yet solemn occasion.

In the culminating session in the evening, H.H. the Gyalwa Karmapa led the Nepali delegation in lighting of butter-lamps before the symbolic Nepal Altar as well as handed over a material contribution of 1000 tents to Dr. Ram Sharan Mahat, senior leader of the Nepal Congress and ex-Finance Minister of Nepal.

During the course of the day, Karmapa also discussed with the dignitaries of the Nepal Embassy and government about the assessment of needs and priorities, and appropriate modes of channelling future assistance to the relief and rehabilitation efforts in Nepal. This would be invaluable to advise and coordinate the efforts of all the institutions and organizations under the auspices of the Karmapa in the world.

The auspicious day ended on a somber note with the lighting of hundreds of butter lamps, and prayers and aspirations, in solidarity with all the victims and affected people of the Nepal earthquake.